Plans to develop Fulwood and Broughton cricket club have moved a step closer after the land was officially purchased on Monday 18th June 2018. 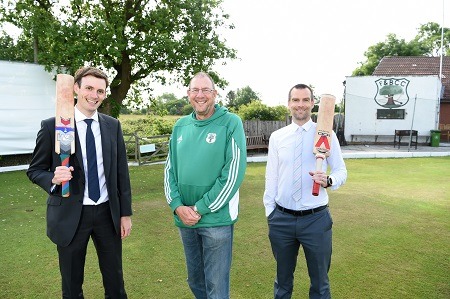 The Preston-based cricket club has acquired over six acres of land from the Homes and Communities Agency (HCA) after raising £70,000 as part of an option agreement.

Based at Highfield, Garstang Road, the club plans to create a new pitch next to its existing facility, providing a larger playing area and extra car parking facilities.

The additional land will allow the club’s third team, which currently plays on a borrowed pitch in Wharton to regularly play at the club, while also giving extra space for the training and growth of its nine junior teams.

Silas Heys and Simon England, from Preston law firm Harrison Drury acted as advisers to the club on its dealings with the HCA and its plans for fundraising. The funds to purchase the land have been raised through member pledges, interest free loans from members and government-based funding.

John Mansford, club treasurer, said: “The grounds that we do have are currently too small for the number of members and players that we have. The extra space will not only transform the club, but it will become a fantastic asset to the ever-expanding local community.

“It’s a really exciting time for us, the fundraising went well, and we raised the funds in time for an early summer completion which means we’re on target. We’re now looking to start the development work in stages. Firstly, if further funding goes well we will start work on the new car park behind the current club house to give us the extra space and then we will be welcoming the addition of a four-bay net system in the new field.”

Simon England, a director at Harrison Drury, said: “We’ve supported the cricket club in its fundraising efforts over the past six months and it’s now great to see the land purchase happening. John and the team at the club have a vision for the space, their members and for the local community. It’s a pleasure to watch that become a reality.”

Fulwood and Broughton Cricket Club was established in 1909, when it won the Palace Shield at the first time of asking, though the club can trace its history back further than this to around 1900.

When it first started, the club played its matches within the grounds of Fulwood Barracks, but moved to Highfield in 1932. The land at Highfield was used as a paddock for Broughton Lodge before the club moved there.